A probability plot can be used to quantify process performance and process capability through a 30,000-foot-level report-out.  In one chart, a 30,000-foot-level report can include a process stability assessment through an individuals chart(s) and a probability plot to make a predictive statement for process performance and process capability.

A probability plot for quantifying process performance provides a methodology to better understand how a process is performing than traditional approaches for making a capability assessment for continuous response data.

The interpretation of a probability plot can initially appear intimidating but is not difficult to understand when one becomes accustomed to this powerful approach to presenting information. Consider the following illustration.

Content of this article is from Chapter 12 of Integrated Enterprise Excellence Volume III – Improvement Project Execution: A Management and Black Belt Guide for Going Beyond Lean Six Sigma and the Balanced Scorecard, Forrest W. Breyfogle III.

To use a probability plot for the quantification of process performance, one needs to determine first if the process is stable from a 30,000-foot-level perspective, as described in 30,000-foot-level Charting with its Predictive Measurements.

The data in Table 1 were collected using an infrequently subgrouping/sampling plan that is consistent with application of a 30,000-foot-level charting methodology.1 This time-series data was determined to be from a stable process, as described in the article Individuals Control Chart (XmR chart, I-chart) Reporting.

This article will discuss the interpretation of a probability plot that was created from the stable process’ data to assess process performance (process capability) relative to specification limits of 72 and 78.

Figure 1 provides a histogram plot of the data with a normal probability density function (PDF) overlay. The area under the curve of a well-fitted PDF beyond upper and lower specification limits is an estimate for the current level of process non-conformance. For this estimate to be valid:

These two objectives for quantifying process performance are more easily achieved through a probability plot of the data, as shown in Figure 2. In this plot, the x-axis is process response and the y-axis is percent less than.

This probability plot provides a process performance statement relative to specification limits of 72 and 78. There is no reason to believe that these data do not follow a normal distribution since the P-value is 0.522 (upper right table of plot), which is greater than 0.05, a commonly-used value in hypothesis testing for determining statistical significance. From this plot, a process capability/performance metric estimate would be 17.4% non-conformance [(100-96.793) +14.192 = 17.399], which is consistent with a visual estimate of the area under the curve in Figure 1 beyond the specification limits.

An overall summary about this process and its performance can be netted out using a 30,000-foot-level charting format, as shown in Figure 3. The bottom of a 30,000-foot-level report-out includes a quantification of whether a process has a recent region of stability (predictable process) or not and a prediction statement, if the process is predictable. 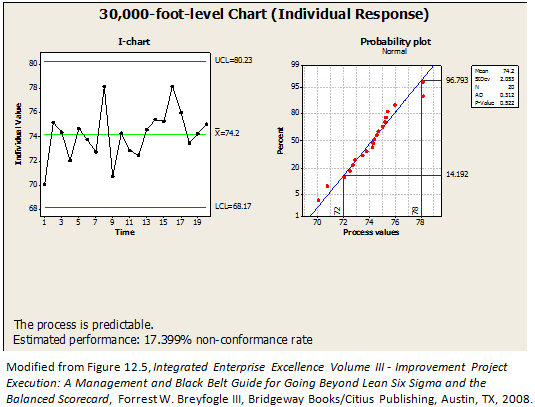 A 30,000-foot-level chart’s predicted value provides an estimate for future performance, given that nothing changes in the process; i.e., the results of a process’ current level of common-cause variability. If the predicted value is not satisfactory, the process needs improvement. A statistical hypothesis testing of causal theories from the recent region of stability can be helpful to gain insight as to what could be done differently to improve the process’ performance. For example, an analysis may show the impact from the use of differing operating procedures when executing a process; i.e., how procedure differences impact the current process’ common-cause variability magnitude.

The result of this analysis could lead to a selection and execution of the best procedure, which would transition the 30,000-foot-level control chart to a new level of stability that has an improved level of performance. Chapters 22 – 28 of Integrated Enterprise Excellence, Volume III: Improvement Project Execution(1) provides the tools for making the described statistical assessments. Application of the book’s detailed process improvement roadmap is provided through Lean Six Sigma training, which references this publication in its blended on-line or stand-up education.

Eight illustrations of transitioning traditional dashboards and scorecards to 30,000-foot-level reporting where probability plotting for quantifying process performance is used for continuous data is described in the article Predictive Performance Reporting.

The Integrated Enterprise Excellence (IEE) use of 30,000-foot-level reporting addresses the business scorecard issue that are described in a 1-minute video:

Contact Us to set up a time to discuss with Forrest Breyfogle how your organization might gain much from an Integrated Enterprise Excellence (IEE) Business Process Management System and its 30,000-foot-level performance reporting with a probability plot. 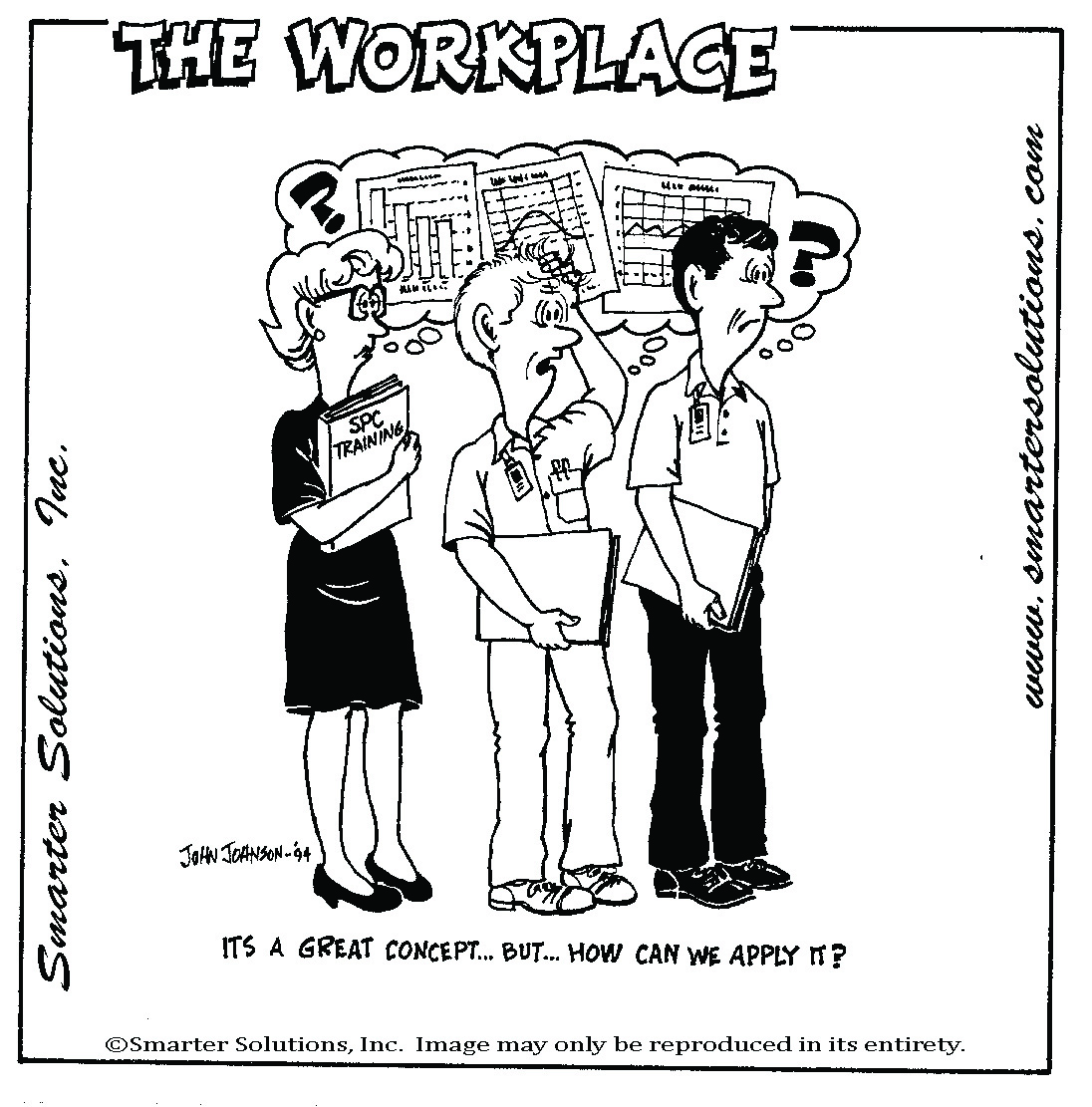