Traditional p chart control limits formula calculations can lead to firefighting common cause variation as though it were special cause.  This “false signal” issue can occur when common-cause process variation occurs between subgroups.

Described are p-chart issues and resolution to identified problems with the p chart control limits formula calculation, which can improve organizational action to attribute data events.

The techniques can also be applied to the implementation of an organizational Operational Excellence system that structurally integrates performance measures (and their improvement) with the processes that created them.

Content of this webpage is from Chapter 13 of Integrated Enterprise Excellence Volume III – Improvement Project Execution: A Management and Black Belt Guide for Going Beyond Lean Six Sigma and the Balanced Scorecard, Forrest W. Breyfogle III

P-charts are used in quality control to identify when special-cause or out-of-control conditions occur in time-series data so that timely corrective actions can be taken to resolve problems. Sometimes data from a p-chart are used also to provide a process capability statement or non-conformance statement.

However, there are issues in how p-charts are often created and applied because of the  p chart control limits formula.

The application shortcoming of p-charts will be described in this article along with an alternative 30,000-foot-level charting methodology that not only addresses this issue but also enhances application of the techniques. The described methodology not only improves the accuracy of common-cause and special-cause statements but also provides a better and more easily- understandable process capability or a process performance statement that is predictive.

This article will build on the special-cause and common-cause variability concepts described in the article Control Charting Issues: 30,000-foot-level Chart Resolution as it relates to time-series attribute data compiled in subgroups.

When examining time-series data, what we want to occur is the most appropriate action or non-action. However, the conclusion of what action or non-action to take can be a function of how the data are examined. This point will be illustrated using the data in Table 11, which provides the number of daily non-conformances that occur from the number of daily transactions that occur; i.e., 10,000.

These data could describe the number of daily non-conformances from an insurance company, hospital, or one-shift manufacturing facility.

Traditionally, proportion (p) non-conformance rates are tracked over time using a p chart to detect special-cause occurrences. This approach would be appropriate using a Shewhart strategy.

Whenever a measurement is beyond the LCL or UCL on a control chart, the process is said to be out of control. Out- of-control conditions are special-cause conditions, which can trigger causal problem investigations.

For the p chart of these data, shown in Figure 1, many causal investigations could have been initiated because there are many out-of-control signals. Out-of-control processes are not predictable; hence, no process capability claim should be made.

For p charts, failure rate p is tracked over time with an LCL and UCL of:

From these equations, the LCL and UCL are determined using the average non-conformance rate (

) and subgroup size (n). When the subgroup size is large, as it can be in many business situations, the distance between the LCL and UCL can become quite small. Variability from day-to-day material lot differences or day-to-day transaction differences can create the type of out-of-control signals shown in Figure 1. 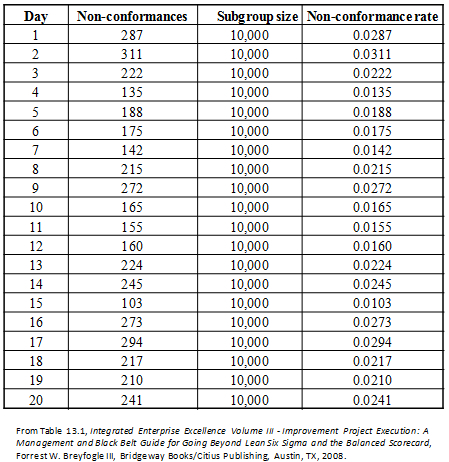 Unlike with a p-chart, the control limits for an individuals or X chart are a function of the average moving range between adjacent subgroups. The importance of capturing between-subgroup variability when calculating statistical process control-chart upper and lower control limits was discussed in Control Chart Issues: 30,000-foot-level Chart Resolution.

The X chart is not robust to non-normal data; therefore, for some situations, data need to be transformed when creating the control chart. One example of a non-normal condition is when there is or tends to be a natural boundary condition. For this situation, the control chart can cause false signals where common-cause variability appears as to be special cause.

When attribute control-chart subgroup sizes are similar, an X chart can often be used in lieu of a p chart when creating a 30,000-foot-level chart. The advantage of this approach is that between-subgroup variability will impact control-chart limit calculations. An X chart of the non-conformance rate in Table 1 is shown in Figure 2.

The process capability/performance metric for this process can then be said to have a non-compliance rate about 0.021. That is, since the process is in control/predictable, it is estimated that the future non-conformance rate will be about 0.021, unless a significant change is made to the process or something else happens that either positively or negatively affects the overall response. This situation also implies that Band-Aid or firefighting efforts can waste resources when fundamental business process improvements are really what are needed.

A subtle, but important, distinction between the two approaches is the customer view of the process. In the example above, the Shewhart approach (p chart) encourages a firefighting response for each instance outside the control limits, while the Integrate Enterprise Excellence (IEE) approach encourages looking at the issue as an organic whole – an issue of capability rather than stability. If the problem is an ongoing one, the IEE view is more aligned with the customer view (whether internal or external) of process performance. The process is stable, though perhaps not satisfactory, from the customer perspective.

The following video describes the application of a no-charge software app to use for your data sets, which addresses the problems with traditional p-chart problems.

Pulling for the Creation of Projects

The selection of projects within Lean Six Sigma is critical. However, organizations often work on projects that may not be important to the overall business. With this procedure, organizations could even be sub-optimizing processes to the detriment of the overall enterprise.

Business existence and excellence (E) depend on more customers and cash (MC2). The IEE system focuses on E = MC2 for project selection.

An organization can integrate the describe 30,000-foot-level form of performance metric reporting with the processes that created them through the Integrated Enterprise Excellence Operational Excellence System.

Reporting at the 30,000-foot-level, with its predictive performance metrics, can also be used to transition common place scorecards and dashboards to predictive reporting.  Eight illustrations and benefits of this transition are described in Organizational Predictive Performance Reporting.

When 30,000-foot-level charting is applied within an overall Integrated Enterprise Excellence (IEE) business management system, traditional scorecard and process improvement efforts that often have issues are addressed, as described in a 1-minute video:

Contact Us to set up a time to discuss with Forrest Breyfogle how your organization might gain much from an Integrated Enterprise Excellence (IEE) Business Process Management System and its Enterprise Performance Reporting System (EPRS) software.

Appendix A includes a free software app where process stability and process capability can be reported in one chart for your data!

Schedule a free ½ hour Zoom Meeting Session with Forrest to discuss your needs.

A “click of the mouse” organizational understanding and improvement system is illustrated in Chapter 6. Appendix B provides information on how organizations can create a similar behind-the-firewall system in their business!

We use cookies on our website to give you the most relevant experience by remembering your preferences and repeat visits. By clicking “Accept All”, you consent to the use of ALL the cookies. However, you may visit "Cookie Settings" to provide a controlled consent.
Cookie SettingsAccept All
Manage consent

This website uses cookies to improve your experience while you navigate through the website. Out of these, the cookies that are categorized as necessary are stored on your browser as they are essential for the working of basic functionalities of the website. We also use third-party cookies that help us analyze and understand how you use this website. These cookies will be stored in your browser only with your consent. You also have the option to opt-out of these cookies. But opting out of some of these cookies may affect your browsing experience.
Necessary Always Enabled
Necessary cookies are absolutely essential for the website to function properly. This category only includes cookies that ensures basic functionalities and security features of the website. These cookies do not store any personal information.
Non-necessary
Any cookies that may not be particularly necessary for the website to function and is used specifically to collect user personal data via analytics, ads, other embedded contents are termed as non-necessary cookies. It is mandatory to procure user consent prior to running these cookies on your website.
SAVE & ACCEPT