You Are Here:
Home
/
Resources
/
Issues and Resolution to C Chart Formula Problems

A major issue with the c chart formula is that if a process has between subgroup variability that is common cause false special cause signals can often occur. This is an important concept that everyone who uses a c chart understand. A 30,000-foot-level metric tracking approach not only gets around this problem but also provides a process capability statement (in one chart).

The described c chart formula issues and resolution to those deficiencies provide an enhanced measurement reporting and improvement system for organizations.  c-charts are used in quality control to identify when special-cause or out-of-control conditions occur in time-series count data so that timely corrective actions can be taken to resolve problems. Sometimes data from a c-chart are also used to describe process capability.

However, there are issues in how c-charts are often created and applied. Related process-capability statements can have issues, too.

The application shortcoming of c-charts will be described in this article along with an alternative 30,000-foot-level charting methodology that not only addresses these issues but provides an enhancement to the techniques. The described methodology not only improves the accuracy of common-cause and special-cause statements but also provides a better and more easily understandable process-capability or process-performance statement that is predictive.

This article will build on the Shewhart1 and Deming2 special-cause and common-cause variability concepts described in Control Charting Issues: 30,000-foot-level Chart Resolution as it relates to attribute count data that occur in subgroups.

Content of this webpage is from Chapter 13 of Integrated Enterprise Excellence Volume III – Improvement Project Execution: A Management and Black Belt Guide for Going Beyond Lean Six Sigma and the Balanced Scorecard, Forrest W. Breyfogle III.

The examination of time-series data should lead to the most appropriate action or non-action to occur; however, a resulting conclusion of what action or non-action to take can be a function of how the data are examined. This point will be illustrated using the data in Table 13, which contains the number of incidents that occurs during a monthly subgrouping period.

This data could be the number of safety or health incidents that occurs in an insurance company, hospital, or one-shift manufacturing facility during a period of time; i.e., month. In the following analyses, focus will be given initially to the assessment of process stability and then, if stable, a process-capability or process-performance statement could be made.

From these equations, the LCL and UCL are determined using the average number of counts (

) and subgroup size (n). Whenever a measurement is beyond the LCL or UCL on a control chart, the process is said to be out of control. Out-of-control conditions are special-cause conditions, which can trigger causal problem investigations. From these relationships, it can be noted that variability between subgroups has no impact on the upper or lower control limit calculations.

For the c chart of this data, which is shown in Figure 1, no causal investigations would have been initiated because there are no out-of-control signals. However, using this chart to make timely decisions can be very difficult because of the infrequent monthly subgrouping. Also, there are many zero values, which is desirable from a response point of view but not from a control charting perspective. One way to get around this problem for this set of data is to reduce the subgrouping frequency to, for example, quarterly, but that would make any decisions from using this chart even less timely.

Unlike with a c-chart, the control limits for an individuals or X chart are a function of the average moving range between adjacent subgroups. The importance of capturing between-subgroup variability when calculating statistical process control chart upper and lower control limits was discussed in Control Chart Issues: 30,000-foot-level Chart Resolution

The X chart is not robust to non-normal data; therefore, for some situations, data need to be transformed when creating the control chart. One example of a non-normal condition is when there is or tends to be a natural boundary condition. For this situation, a control chart with no data transformation can cause false signals where common-cause variability appears as to be special cause.

The process from which the Table 1 data originated has infrequent failures. Instead of the above format, consider now that the times between failures were recorded and presented in the format shown in Table 2. Note: this is not describing a different situation but an alternative approach for recording failure data.

Table 2: Time Between Each Incident

This chart indicates that our process is predictable with an estimated mean time between incidents or mean time between failure (MTBF) of 84 days. This value could be converted to an average annual or monthly incident rate.

Consider that a cost analysis of these failures indicated that improvement was needed. This would be the 30,000-foot-level metric pulling (using a Lean term) for an improvement project creation.

Consider that a project’s change was implemented, and this resulted in the 30,000-foot-level chart shown in Figure 3. 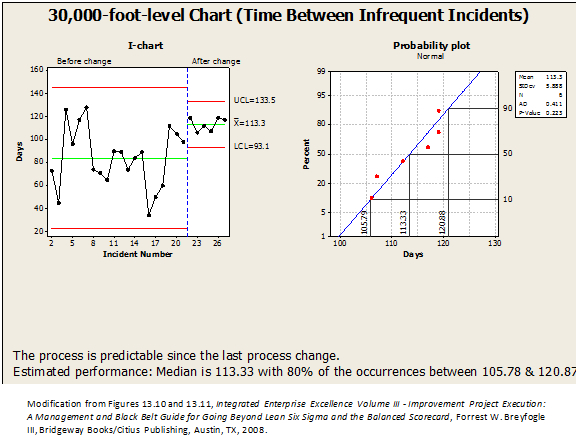 This figure indicates that the process has reached a new stability/predictability level from its past level estimation of 84 hours between incidents. The new process capability/ performance metric estimate has a median of 113 (113.33 rounded off) and frequency of occurrence of 106 (105.78 rounded off) to 121 (120.87 rounded off). In time, when more data becomes available, this prediction estimate can be refined.

Organizations benefit when they use the above 30,000-foot-level reporting format throughout their business.  Most traditional dashboards and scorecards consist of a table of values, stacked bar charts, stoplight scorecards, or some other forms of presenting historical data.  These charting formats can benefit from a transition to 30,000-foot-level predictive metric reports.  Links to ten traditional dashboards or scorecards that have been transformed to 30,000-foot-level reporting are provided through a Predictive Metric Reporting article.  This article also describes how these metrics can be systematically reported throughout an organization with automatic updates. 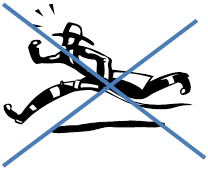 Contact Us to set up a time to discuss with Forrest Breyfogle how your organization might gain much from an Integrated Enterprise Excellence (IEE) Business Process Management System and resolution to the described c chart formula problems.